Ravindra Jadeja straightens his hair before every game

And uses an Australian wax to hold that ‘stache in place

“One thing I’ve learned through sport is persistence,” Ravindra Jadeja says. Before you sneer at this cliché, know that this is the moustachioed man who was jeered by fans in the 2009 T20 World Cup for failing to pick up the pace with the bat when the situation demanded, then made a wild comeback in the 2013 Champions Trophy, before being dropped again last year, then finally performing well in the recent Test series against South Africa. So if you feel like trolling the man on social media just because he dresses up for work, think of the sheer tenacity that keeps him coming back for more.

The team looks a lot fitter than before, what’s one thing you’ve worked on?

Basu (fitness coach Shankar Basu) comes down very hard on me. He’s always telling me to run more. It’s something I’m still working on. But when I’m not doing that, I’m working on my upper body.

Most of you are wearing the Fitbit.

It’s a Fitbit Surge. The whole team has one so that Basu can track our fitness on a daily basis.

Those are some really cool shoes, are you headed for another shoot?

No, these are my custom-made jutiya. I’m a Rajput and we used to wear these before so it’s a throwback to my heritage. I personally prefer boots when I’m not wearing these.

Any particular brand of boots that you prefer?

I try not to get lured in by brands but every time I’m in Australia, I keep an eye out for RM Williams. Most of the guys like that one.

A lot of members on the team are crazy about cars, do you guys ever race?

I’m not as crazy about cars as the rest of them. I like horse riding. I have about five horses. 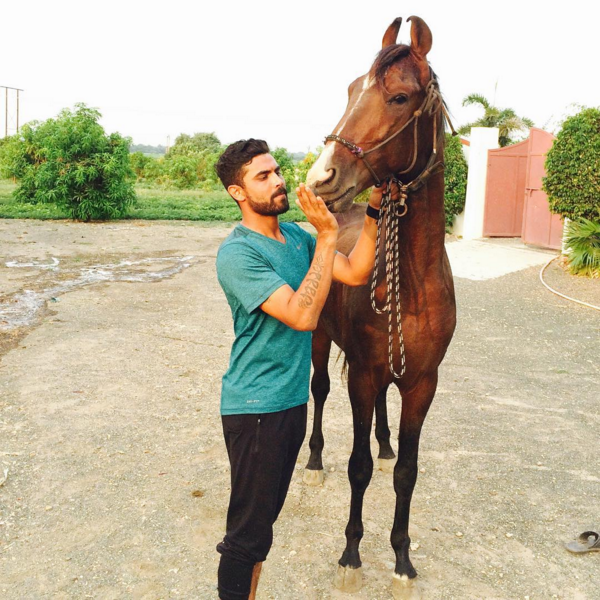 How long do you spend on your hair?

Right now I’m trying something new, so I’m going to let it grow for a bit. But on a regular day, I spend about half an hour on it because I have curly hair and I need to straighten it every day.

So you have an iron of your own?

Yes I do. I carry it with me wherever I go. I straighten my hair and use an Australian wax to hold it together. And I use some of that wax when I curl my moustache.

As obsessed with your hair as Ravindra Jadeja? Consider one of these GQ-approved haircuts

The high and tight

How to get it: Your barber should know it by name. There’s room for variation, but usually it goes from the lowest setting on electric clippers and fades up, leaving the top long enough to work in some pomade.

How to get it: This is a super simple, no-muss, no fuss haircut done exclusively with clippers. Ask for a fade from short to not-so-short using a high clipper setting on the top and “corners”.

How to get it: Ask your barber to clean up the back and sides and leave it long on the top. Style with light gel or pomade. Your hair should still be soft to the touch when done.

How to get it: Have your barber use clippers all the way up the sides, leaving it very long on top, without any fade – hence the name.

How to get it: Like the Crew, but your barber will use one setting over the entire head. Shahid Kapoor’s in Haider was about a half inch.

How to get it: Shave the back and sides with clippers, fading up to the “round” of the head. The top is left long. Style with pomade or wax.